To understand this, it is important to understand historical geography. Romania is located in southeastern Europe. Today it borders (in clockwise order) Ukraine, Moldova, Bulgaria, Serbia, and Hungary. Its borders have changed and so have the empires that ruled over Southeast Europe. At one time, what is now Romania was ruled by the Austro-Hungarian Empire, the Ottoman Empire, and the Russian Empire. This has long been a strongly contested region with varied geography.

Bessarabia was a vassal state under the Ottoman Empire., known as the Principality of Moldavia. After the first Russo-Turkish War, the eastern part of the Principality of Moldavia became part of the Russian Empire as the Governorate Bessarabia, in 1812. Its geographic expanse included territory between the Dniester and Prut rivers. In 1856, after the Crimean War, the southern part of Bessarabia would return to Moldavia. The Principality of Moldavia united with Wallachia to form the Romanian United Principalities in 1859. In 1878, after the 2nd Russo-Turkish War, Romania ceded southern Moldavia to the Russian Empire, while gaining the territory of northern Dubroja. After the Russian Revolution, the Moldavian Autonomous Soviet Socialist Republic was formed as an autonomous republican under the proposed Russian territory. In 1918, the Romanian Army went to the region to stop Bolshevik insurgence. Moldavian ASSR would declare independence from Russia and unite with the Kingdom of Romania, and remained part of Romania until 1940. As a result of the Molotov-Ribbentrop Treaty, the lands between the Prut and Dniester rivers was annexed by the Soviet Union. Today, part of then-Bessarabia is part of the modern-day country of Moldova. Romanian is spoken in Moldova by the majority of the population, and Romanian culture is dominant in Moldova. Part Bessarabia is the eastern region of Romania known as Moldavia. The southern portion of what was Bessarabia is part of Ukraine.

(Photo of the extent of Bessarabia (also called Moldavia).

Bukovina is a region that is split between Ukraine and Romania today. In Romania, Bukovina is in the northern portion of the country, in the Carpathian Mountains. It was part of Moldavia during the Middle Ages. From 1774 until 1918, it was part of the Austro-Hungarian Empire and the Hapsburg Monarchy. This region was a major battleground during World War I, as many battles were fought here between the German, Russian, and Austro-Hungarian armies. It became part of Romania in 1918. Under the Molotov-Ribbentrop Treaty of 1940, northern Bukovina was annexed by the Soviet Union. 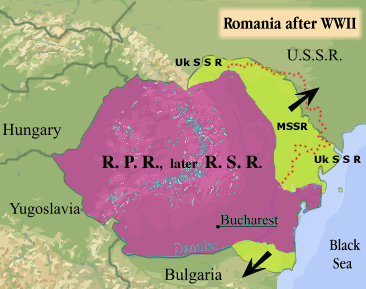 Transylvania is a historical region that makes up a large part of modern-day Romania’s territory. Transylvania comes from the Latin words for “across the woods”. Transylvania is a forested region, and very mountainous (Moldoveanu Peak, the highest mountain in Romania, is in this region). Transylvania has been a contested region for centuries. It was a major part of the Kingdom of Dacia before being annexed by the Roman Empire (Romania has an automobile company called Dacia in its honor). Several other groups controlled the region for centuries, such as the Avars, Huns, Visigoths, Bulgarians, Magyars, etc. For 5 centuries, it was under the rule of the Kingdom of Hungary. Another thing to consider are the Ottoman-Hungarian wars (1366-1526). The Ottoman Empire’s goal was to conquer the entire Balkans region and territories in Central Europe, the Kingdom of Hungary being among those territories. At the conclusion of the Ottoman-Hungarian wars, the Ottoman army defeated the Hungarian army at the Battle of Mohacs. This led to the Kingdom of Hungary being partitioned. Transylvania became the the Eastern Hungarian Kingdom from 1526-1570, and then the Principality of Transylvania from 1570-1711. After that, the Hapsburgs would rule over Transylvania until 1867, when it became part of the Austro-Hungarian Empire. Specifically, Transylvania was part of the Lands of the Crown of Saint Stephen, the Hungarian territories of the Austro-Hungarian Empire (a dual monarchy empire). A large Romanian population lived in Transylvania. Transylvania would become part of Romania in 1918 as well.

(Photo: Partition of the Kingdom of Hungary)

The regions of Bessarabia (which also included Bukovina), Transylvania, and Wallachia were vassal states under the Ottoman Empire at one point. However, part of Romania (specifically the regions south of the Danube River) was directly ruled by the Ottoman Empire. This would change between 1877-1878, while the Russo-Turkish War was taking place. Romania allied with the Russian Empire. As a result of the war, lands south of the Danube River would be independent of Ottoman rule, as northern Dubroja and the Danube Delta would be handed over to Romania. This would give Romania access to the Black Sea via the city of Tomis (today it’s called Constanta). Romania would lose southern Bessarabia to the Russian Empire though. Part of southeast Romania was ceded to Bulgaria after World War II.

World War I would be another factor that would shape Romania. As nationalism grew during the early 1910s, all of this came to a head when Archduke Franz Ferdinand was assassinated by Gavrilo Princip, a Yugoslav nationalist. This would lead to World War I. World War I would be a big part of the downfall of the Austro-Hungarian Empire, and would lead to Transylvania becoming part of Romania, as well as Bessarabia (also known as Moldavia).

On December 1, 1918, Bessarabia, Bukovina, and Transylvania united with the Kingdom of Romania to form Greater Romania. The National Assembly of Romanians In Transylvania And Hungary was heled in Alba Iulia, located in the Transylvania region. It was voted that the territories of Romania and Romanians themselves should be brought into unification.

Parades often take place in Albia Iulia. This is fitting because this where the national assembly decided that territories of Transylvania, Bessarabia, Bukovina, and territories where Romanians lived should be united. Parades also take place in Bucharest, the capital of Romania.

The first National Day of Romania celebrations took place more than 7 decades later, in 1990. This came after the Romanian Revolution in 1989. Romania had been under a Communist dictatorship, and the rule of Nicolae Ceausescu was particularly oppressive. After the revolution and the execution of Ceausescu, National Day would be declared by the new government.